It all started innocently enough:  It was just a phone call to my sister-in-law.  I just wanted let her know that her shots of the collars on her dog that I posted on Etsy received literally hundreds of hits in the 10 hours it was up...and please send any other cute ones you find.

My brother got jealous. 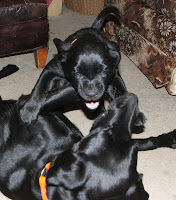 I was informed that Boomer, my brother's dog,  was unsettled by this publicity stunt for Gauge and was wanting to break contract with Big Bad Collars.  After soothing Boomer Prima Donna's nerves (Boomerdonna for short) that he is still the most featured dog at Big Bad Collars, I received an adorable puppy picture from my sister-in-law.

Of Gauge, of course.

Then the retaliation began.  It has now escalated...I fear beyond my control... 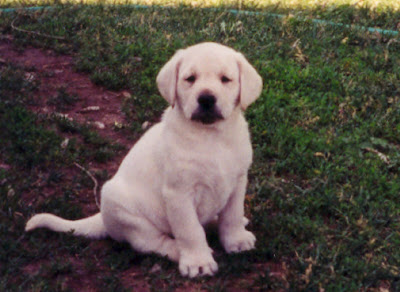 THE PUPPY WARS HAVE BEGUN!
Posted by Big Bad Collars at 1:11 AM