The alliance is broken.  The war ends.

It is the end of an era.  George and Boomer have broken up.  I guess my only surprise is that it took this long.  Boomer has given George the boot.  Boomer is suing the state for emancipation.  In his court documents, he is citing irreconcilable differences. 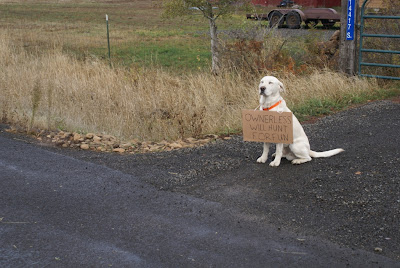 George is on record admitting,  "Disgusted with my shooting percentage opening day, I caught Boomer pan handling on the street."
Betty's only commentary was, "It is so hard to find true loyalty these days."  Her statement was dictated between bites of New York Strip while upon her down filled sofa.


I must say though, that even I feel that Boomer has smited a low blow.  Boomer has hunted with George for years...

Boomer should know by now not to expect better.
Boomer, you are always welcome back here at Big Bad Collars.  Your modeling legacy could never be filled.
(You wouldn't happen to have Gauge's number on you, by the way...)