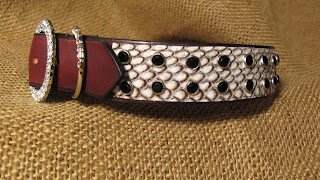 So here's the deal:  I have learned the hard way...again...not to try to make things when I am sick.  This collar has all the works:  Swarovsky Buckle from one of the oldest brick and mortar stores in the New York Garment District, real Cobra skin, Fine latigo leather...but unfortunately the crystals are in a wavy line...and for some reason I went delirious and thought I was making it for a mastiff, not a french bulldog, and I awkwardly put the end crystals that are only needed for the big collars.  It is still a beautiful piece and the flaws won't be apparent on the dogs neck...but I KNOW!  And since I am OCD about my crystals in straight lines...I just couldn't sell it and I remade the special order (with straight lines!!!)  I hate to waste the work hours...and Cobra skin...to cut out the buckle to salvage...soo I am trying my first factory reject sale (trying to salvage the money to replace the skin and the buckle...)

One would think I would learn....I once tried to work with a bad sinus infection...and I think it literally puts pressure on my equilibrium or something...I spent 30 minutes constructing something, and 1 1/2 hours taking it apart and re-making it (not too mention the leash decorated...and forgot to leave spot for the snap hook...).  Apparently pneumonia has the same delirium effect....sigh....
It will be first, come first served if there are multiple requests.
Posted by Big Bad Collars at 10:49 AM