Soooo...a while back, before even the real heat set in, we celebrated the transition of our youngest from "the world's worst two year old" to the "world's worst three year old".

She had two requests for her party:  Balloons!!! And fresh corn from the farm a 1/2 mile over.  The farmer went and got her ears straight from the field...2 dozen...and we got balloons...2 dozen.

The corn was all gone...but the balloons were still up in the evening; therefor, we left them for the kids to enjoy...with the intent to pick up the withered remains in the morning.

If there was anyone out there that doubted the Arizona sun...this was what we found the next morning:  the balloons had already MELTED into the brick.  Even my husband "Mr. 105 is NOT hot!" was impressed and ran to get the camera...and this was back in JUNE!  (And only the morning sun!) 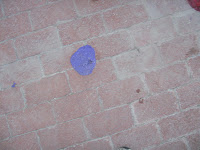 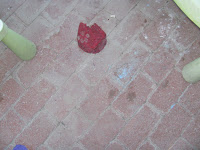 Shockingly, the sad saps east of the Rockies have been hotter than Arizona!  Now that is saying something!