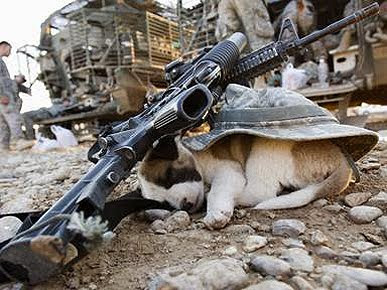 The Stories tell themselves the best:

More Clips and Stories:
No Dog Left Behind : Military Channel

TV's 'No Dogs Left Behind' Follows Rescued War Dogs on Journey to U.S.

Goran Tomasevic/Reuters
While he was in Iraq, Staff Sgt. Bryan Spears and his company found a scrappy puppy and named him Moody. But due to military regulations, they were prohibited from caring for the animal, and the soldiers said their goodbyes to their new friend.Fast-forward a few weeks later, and tragedy strikes: Five members of Spears's team are killed in an attack by a suicide bomber. That same day, Moody returns — and it was that turn of events that Spears says saved him from losing all morale. The dog had helped him cope with the loss of his fellow soldiers.  After that, there was no question that Moody would be going home with Spears when it came time for him to end his tour of duty; the only question left was how to do it. Moody's story, along with that of three other dogs traveling to the U.S. (including Nubs, who had a 75-mile odyssey through the desert), was chronicled for No Dogs Left Behind, a documentary airing Nov. 15 on the Military Channel.
Moody was rescued by a team from SPCA International called Operation Baghdad Pups. The project began in February 2008 after SPCA International received an inquiry from a soldier who desperately needed help with retrieving a dog he had befriended in Iraq. Since then, the team has launched 42 missions to Iraq and has saved 180 animals.

The process of bringing a dog from Iraq to the United States costs an average of $4,000. SPCA International funds most of the effort with the help of donations, and asks each dog's soldier to contribute $1,000 if they can — but things don't always go as planned.

"When you're running an operation that's inside a country that's at war, a lot of things are beyond your control," says program manager Terri Crisp. One time, she says, a dog didn't make it out as scheduled because the Iraqi president was flying in and the airport was shut down. The dogs are sometimes gone by the time the team gets there — "whether they ran off or somebody took them, you don't ever know for sure."

Most important, though, is the commitment of the soldier asking for the dog's transport. "They're making an investment in the animal, and chances are they're going to take care of that animal" Crisp said. "The level of commitment to the animal is unbelievable. They've been through so much together."

Ellen Goosenberg, the documentary's executive producer, told PEOPLEPets.com that her hope is that No Dogs Left Behind will humanize soldiers, their experiences and their needs once they return from war.

"A lot of times, they need a community," Goosenberg said. "They need to be understood. There's no way you transition from war back to civilian life without some kind of assistance. Sometimes animals do a brilliant job at that."
Posted by Big Bad Collars at 3:10 AM

Email ThisBlogThis!Share to TwitterShare to FacebookShare to Pinterest
Labels: Irag stray dogs, No Dog Left Behind