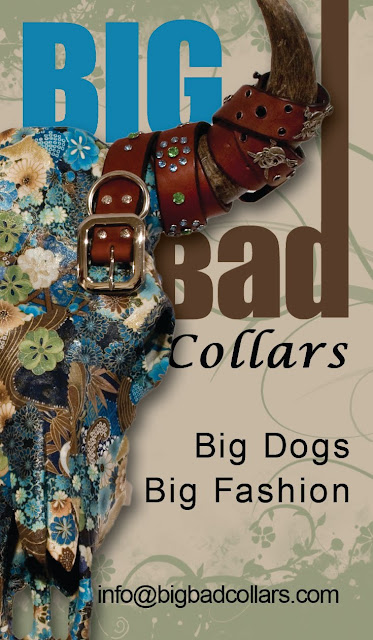 A little while back I asked my friend Gail if she could possibly snap a shot of one my collars with her super-awesome camera so I could make a new business card.

You see I felt this was only fair since Gail was one of the main detractors of the old business card.  To say she hated it was to put it politely.  And...my husband hated it.  His best friend hated it.  My mother hated it.  And being so supportive, they all reassured me often of how much they hated it.

I liked it at 4 in the morning when I put in the panicked order so that it would arrive in time for my first Arts Festival.  As Tim Gunn put it, "be careful of decisions made at 3 in the morning".  I figured I was safe:  this was 4 in the morning.

So after an eternity of mockery, I broke down and gave up the teenage rebellious defense of THE card...everyone was aware of what I was capable of when left to my own means...and asked for help (really it is a cute picture... and he is big...  and he was very, very bad...  it was the day the puppy Brickles ate my rosebush...to the ground...  and it made perfect sense in my addled sleep deprived brain...).

When Gail said she was willing to shoot some more pictures of more collars...I humbly asked if she could slip in some shots of my decorated Cow Skulls.  (Oh who I am trying to kid, the fact is I have become such a leech upon Gail that I don't even know where my own camera is most days.  Every time I have to do shots from my worktable it's a 20 minute or longer search...I always generously offer to carry her water when we go hiking...cough cough...so she is free to carry her gear...)

One morning it simply appeared.  With a simple tag line such as 'finally got it done' or some such nonsense....And followed with a matching banner...matching blog...

(She is only encouraging bad behavior on my part...)
Posted by Big Bad Collars at 8:37 AM