HOW COOL IS THAT! 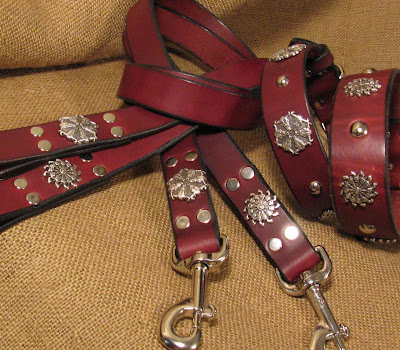 A VERY NICE SET DESIGNED BY A VERY NICE PERSON.
You know something, dog people can be some pretty good folk.

Recently I have had some very nice good fortune.  Marcella, the world's sweetest Doberman, her owner was so nice to tell her breeder about Big Bad Collars.  Her breeder, Steve Parsons of  Family Dobes was kind enough to give me a lovely write up in his newsletter .  (All of this without my knowing...I just received a very nice email one day with links and compliments...very flattering...can you tell I am proud?!?)

A couple days later I was contacted by Peter (whom I unfortunately called Paul for an entire day before I realized it...and he very nicely and politely never said a word...so embarrassed...I blame PBS and their eternal re-runs of the Peter, Paul, and Mary reunion concert to the point that I can no longer separate the names...). 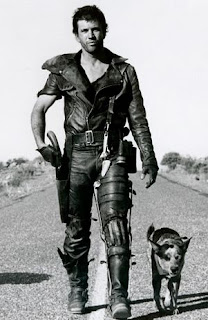 This job is so wonderful, because the people I meet as customers are so nice!  And yes, I am using that word a lot today.  I feel all our lives can use a little more "nice" in them.  Nice, I believe, is the foundation of civilization.  It is courtesy shown for one another.  It is care shown for a neighbor.  It is kindness offered to someone who is experiencing a day with very little kindness in it.  It is the small things that make us smile.  It is the control that prevents us from walking around punching each other and living in a Mad Max World.  I have worked jobs with very little nice.  I think of it especially today because of someone's comment on Facebook.  She is a bankteller.  I was a bankteller for about a year, many years ago.  Sadly, people are often not nice when at the bank.  You see an ugly side to humanity.  People come in stressed, worried, short fused and short tempered.  I would rather clean toilets, (and I have), than be a bankteller again.  My daughter often asks me why I am so chatty with cashiers, or even just passersby.  Partly, I am just chatty.  I would chat the ears off of a sign post.  But partly, I am just trying to be nice.  And I hope that their day will be nice too. 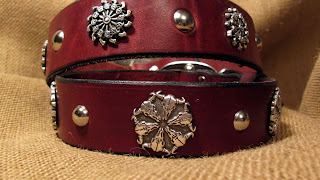 Peter has an adult male from Family Dobes and a male pup. He wanted something sturdy, useful and does the breed justice:  he wanted something tough that would last.  I am proud to say that is what I do.  Thanks to Marcella and Steve Parsons, he sought me out.  For style he wanted something again that complimented the breed:  understated with it's own air of distinction.  I was inspired by "Paladin".  Have you ever seen the show "Have Gun Will Travel"?  (It's on netflix, if you haven't seen it you must!)  I used to watch the re-runs as a kid with my oldest brother.  Paladin was powerful, you didn't mess with him, you didn't cross him.  He was quiet and understated.  And he was nice.  There was always a kind word when needed.  His character was bridled power: restraint and courtesy that held honor and strength.

I really enjoyed chatting with Peter.  I was reminded of what is good in humanity.  To meet him was very nice.

FOR THE PUP, TO KEEP PROPORTIONS BUT ALSO SO HE WOULD STILL HAVE A USEFUL COLLAR AS HE GROWS:  WE TRIMMED IT TO 1 1/4 WIDTH.  ALSO WE GAVE HIM A RANGE OF SIZING SO IT WOULD GROW WITH HIM...BUT USED A SIMPLE SOLUTION FOR THE EXTRA LENGTH:  JUST AN AGE-OLD BELT KEEPER DID THE TRICK!  I CONSTRUCTED IT OF LEATHER SO PETER COULD REMOVE IT WHEN THE PUP OUTGROWS THE NEED.
Posted by Big Bad Collars at 11:39 PM